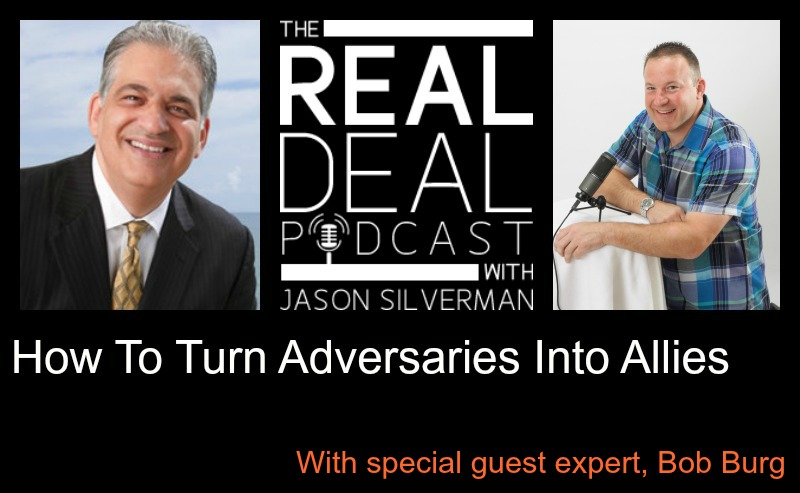 Welcome to this edition of THE REAL DEAL with Jason Silverman!  Prepare yourself for an extended podcast chock full of helpful nuggets and immediately implementable advice!

Jason Silverman got a chance to catch up with Bob Burg, the author of “Adversaries into Allies.”  An amazing resource for anybody / everybody who wants their interactions with other people to go smoother and yield much better results.

This podcast is fabulous for business owners of all kinds.  Listen in and discover some of the secrets of successful relationship building in a really fun and simple way! Bob is a master!  Strap yourself in and get ready to take some life changing notes and ACTION!  This is going to be great!

A little about Bob Burg…

Bob Burg is a sought-after speaker at corporate conventions and for entrepreneurial events. He regularly addresses audiences ranging in size from 50 to 16,000 — sharing the platform with notables including today’s top thought leaders, broadcast personalities, Olympic athletes and political leaders including a former United States President.

Although for years he was best known for his book Endless Referrals, over the past few years it’s his business parable, The Go-Giver (coauthored with John David Mann) that has captured the heart and imagination of his readers.

It shot to #6 on The Wall Street Journal’s Business Best Sellers list just three weeks after its release and reached #9 on BusinessWeek’s. Since its release it has consistently stayed in the top 25 on 800ceoread’s Business Book Best Seller List. It’s been translated into 21 languages. It is his fourth book to sell over 250,000 copies.

He believes his new book, Adversaries into Allies: Win People Over Without Manipulation or Coercion is by far his most important work yet.
Bob is an advocate, supporter and defender of the Free Enterprise system, believing that the amount of money one makes is directly proportional to how many people they serve. He is also an unapologetic animal fanatic and serves as a member of the Board of Directors of Furry Friends Adoption and Clinic in Jupiter, Florida.