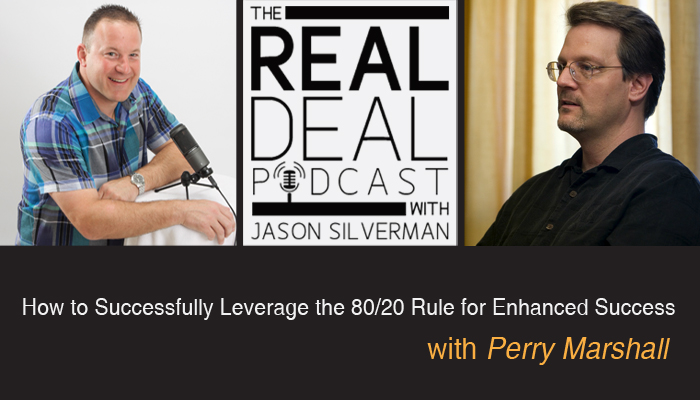 Welcome to this edition of THE REAL DEAL with Jason Silverman!  If you are interested in understanding the nuts and bolts of True Success, this is the podcast to absorb.

Jason Silverman got a chance to catch up with with Internet Marketing Legend, Perry Marshall and was blown away by the information that Perry shared.  Perry literally pulled back the curtain and explained the secrets of the 80/20 rule and why it’s SO important that you understand and take advantage of it.

Strap yourself in and get ready!  This is going to be great!

A little about Perry Marshall…

Entrepreneur Magazine says, “Perry Marshall is the #1 author and world’s most-quoted consultant on Google Advertising. He has helped over 100,000 advertisers save literally billions of dollars in AdWords stupidity tax.”
His Chicago company, Perry S. Marshall & Associates, consults both online and brick-and-mortar companies on generating sales leads, web traffic, and maximizing advertising results. At $2,000 per hour he’s one of the world’s most expensive and sought-after marketing consultants. His top coaching groups have waiting lists, and many clients have engaged his services continuously for 10 years and more.
Prior to his consulting career, he helped grow a tech company from $200,000 to $4 million in sales in four years. The firm was sold to a public company in 2001 for $18 million.

Like direct marketing pioneer Claude Hopkins, Perry has both an engineering degree and a love for persuasive copywriting. He’s taught hundreds of thousands of people how to apply the scientific method to advertising.

He’s been featured at conferences in the U.S., Canada, UK, Israel and Australia. He’s shared the stage with Zig Ziglar, Brian Tracy, Jay Abraham, Mari Smith, Harvey Mackay and Les Brown. He’s consulted in over 300 industries, from computer hardware and software to high-end consulting, from health & fitness to corporate finance.

E-Commerce pioneer Mark Joyner dubbed him “The Grand Ayatollah of Google AdWords.” Direct Marketing maverick Dan Kennedy says, “If you don’t know who Perry Marshall is — unforgivable. Perry’s an honest man in a field rife with charlatans. His methods coupled with Google AdWords offer a fast and cheap testing ground for a lot of marketing messages. He’s a consummate player of this game, the smartest person I or any of my clients have ever found when it comes to Google AdWords – optimizing response for his clients, and teaching others how to do it for themselves.”

Richard Koch, author of The 80/20 Principle says, “Perry Marshall has something original and extremely useful to say, because he has thought profoundly about the 80/20 Principle. He has come up with some original insights that are literally priceless.”

Listen to today’s podcast and discover:

1. What is the 80/20 rule?
2. How does it apply to sales and marketing?
3. What does Perry mean by “stop thinking in averages?”
4. What does Perry mean when he says 80/20 is fractal and how that impacts sales and marketing.
5. Why is a bleeding neck important?
6. Where does social media fit?
7. Where does Adwords fit?
8. What is meant by testing and why can it impact results exponentially.