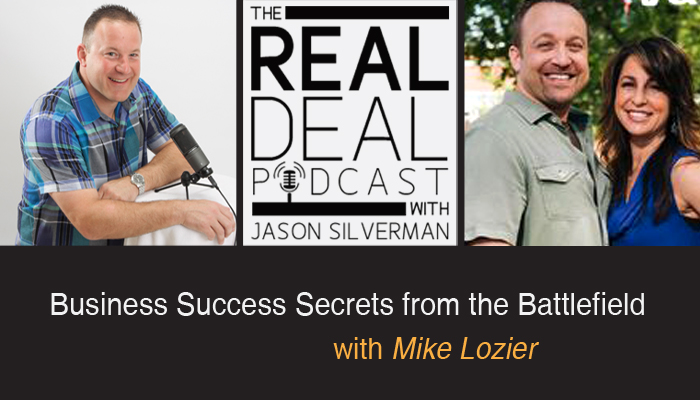 Welcome to this edition of THE REAL DEAL with Jason Silverman!

Jason Silverman got a chance to catch up with with one of his close personal friends…who also happens to be an amazing, real-deal expert.  This was a superb podcast where Jason picked Mike’s brain for all of the success secrets he learned during his 15 year Marine Corp Career and has implemented in growing his business.your benefit.  This is important stuff for anybody/everybody who is serious about growing a business the right way and creating an amazing future for yourself, your family and your staff.  You’re going to get a ton of value from this one!

Strap yourself in and get ready!  This is going to be great!

A little about Mike Lozier…

In 1992 Mike Lozier Joined the Marine Corps.  Went to Parris Island S.C. And graduated Honor Grad.  Went in as a infantry Marine but was selected after numerous tests to be moved to the intelligence community.

He Graduated Boot Camp, went to Marine Combat Training, then to intel school and then shipped off to his first duty station.

He Shipped Off in 1993 to Misawa AFB.  A Remote Airforce Base in Northern Japan.  Spent 2 years there deploying his craft in a highly successful manner.

Mike Left Misawa at the end of 1994 and reported to 2nd Marine Division Camp Lejeune N.C.  It was here that he volunteered to join the reconnaissance community. This Community is 100% volunteer, you run an indoc and then have to be selected by the teams.

Upon selection he was sent to Fort Story Virginia to attend the  Amphibious Reconnaissance School where he Graduated #1 Honor Grad.
Once part of his Reconnaissance Platoon Mike attended the best of the best courses.  US Army Airborne School, Ranger course, S.E.R.E. School, USMC Close Combat Instructor School to name a few.

After 5 years in N.C. Deployed and out had run its toll and in 1999 Mike reported to Fort Meade Maryland to work at the NSA (National Security Agency)

He Did his tour there where he was then selected for MECEP.  Marine Corps Enlisted Commissioning Education Program.   THis is a program that Turns enlisted Marines into Officers

He Went back to OCS (officer candidate School) then to TBS (The Basic School) where he graduated at the top and switched gears and choose Financial Management….Nobody expected FM….but it was part of his master plan with his wife Robyn to set themselves up for success in the civilian sector.

As a FM Officer Mike was responsible for funding all of the Marine Corps detachments across the U.S. For Training and Education Command.

In 2007 he left the Corps…. and began his 2nd career and that was being a business partner with my wife and owner of their own Valpak Franchise.

Listen to today’s podcast and discover:

1.) The 70/30 rule.  What is it and why is it important for success?
2.) The importance of Integrity as a Marine as well as, as an entrepreneur.
3.) How does Accountability plays into the success or failure of a business?
4.)  What role does discipline play in all of this?
5.) LBE – What does this mean and how can business owners implement this concept?
6.)  How does the development of a thick skin impact leaders of companies?
7.)  Embrace the Suck – What does this mean and how can this be used in the civilian world?